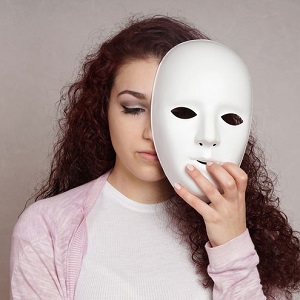 The Mask of Emotional Abuse

Today someone said, “I think physical abuse is easier to live with than mental abuse.”  I know exactly what she was saying, but my reply was “it depends upon the severity of either of them”, Emotional abuse doesn’t seem to be recognized for the devastation it can cause. It is mostly unseen, hidden, and is often disguised by a facade of care and support by the perpetrator, which in reality is masking control, manipulation and total destruction of the other partner’s soul.  Emotional abuse leaves no visible marks on your body, that someone would recognize as abuse. There are no bruises, welts, and marks, but often there really are visible signs, but we don’t recognize them and certainly don’t associate them to emotional abuse.

1. Stripped of your Confidence

When you are stripped of your self-confidence, your personality changes accordingly. You become quieter, sometimes timid, and much more reserved. You are scared to make a scene in case you embarrass either yourself or your family.  Sometimes your appearance suffers too, you may have no or little pride in the way you look. Your clothes may be bland boring or just daggy because either you don’t have money to spend on them or the last thing you want to do is draw attention to yourself.

2. Stop going out and Socializing

You will probably stop going out and socializing you may become a hermit.  Because of the nature of the relationship, you probably won’t have many friends. This would have been discouraged, or you will have been forced to disconnect from any old friends. There certainly won’t be any really close girlfriends who you could confide in.  Your punctuality may have suffered as you  start being very late to attend functions. You believe that no one really wants you there and it is better to just slip in rather than be a focal point at the beginning of a gathering.

Self harm and substance abuse is common, but often in less obvious ways You may gain weight, food will become your comfort and will also protect your body and hide the real you from the rest of the world. The opposite may also happen where you just don’t eat.  Addiction can be a very real problem for the abused person too. They may lean on alcohol, drugs, cigarettes as well as food to mask the effects of sadness, loneliness, and low self-esteem.

Emotional Abuse can start in Childhood

How do I know this?  My whole life I surrounded myself with narcissistic relationships.  These types of people are incredibly emotionally manipulative, controlling, and mentally abusive to live with or have a relationship with.  My mother stripped away any self-worth I had and played shocking mental games with me. Even after her death these games or lies are turning up and biting me.  Reliving the games does explain what happened during my life and helps to make sense of it all.  My sister could always manipulate every situation to her advantage. If I said something was black she would argue to the death that it was white al and ways won. Any compromise she ever made was never fulfilled and her life had no regard for any other people.  My ex-husband was probably the worst. He emotionally and sexually abused me from the beginning of our relationship and as the years went by the intensity increased.

The implications of childhood abuse

The result of this meant I had no idea who I was, what I liked, my life seemed so hard, it was hard to manage and cope each day.   I believed I was so useless, hopeless, pathetic, I had very few friends I could turn to and I believed no one really wanted to be my friend anyway because I was different, I didn’t think logically like everybody else.  These are the things my ex always told me, and why would someone who loved me so much, as he did, lie to me, so I didn’t question them as they must have been true.

The implications in adulthood

Initially, in my marriage I didn’t recognize what was happening, and I believed that everything that happened was my fault, I was the cause of everyone’s problems, but by the end of our 30 year relationship my ex had become so abusive and out of control that I was struggling to take any more abuse, and for the first time in our marriage I started to resist and put up boundaries because I was totally falling apart and I couldn’t take any more.  I was spending hours each day secretly crying, my brain seemed to be in a fog, I couldn’t think, I felt worthless, I believed I was a burden on my family and I was isolating myself more and more from the outside world.

Once we separated I had no idea how I was going to manage on my own. All I wanted to do was curl up and die. That is when I knew I really was in trouble.  Something inside me, a kind of survival mechanism, kept telling me I had to come through this, come out the other side.  I had to learn how to be fully capable of looking after myself and be on top. I had no idea how or where to start.  The one thing I did know was I didn’t want to repeat this relationship ever again.  I knew I had to change and learn from what happened in my marriage.

I really believe everyone’s life is so different and unique to them. What I did may not suit everyone either and your journey may be totally opposite to mine.  I wanted to know exactly why everything happened and why it happened to me. I went on a journey of self-discovery to find who I really was.  I also analyzed dissected and scrutinized every little thing that happened to me and to my kids during my life.  I examined my family dynamics, my ex’s family and what we both learned from our respective families.  I also looked at both of our values and saw how unaligned they were and how I had compromised or ignored so many of my beliefs.  I also took responsibility for allowing the relationship to proceed in the way it did.  I fully owned that I was co-dependent on him and I had no boundaries.  I accepted bad behaviour towards me.

Unmasked, dusted off, and going straight ahead

This was 4 ½ years ago, I’m writing this account from the international lounge at the airport as I am just about to embark on my 3rd overseas trip, I’m away for nearly 2 months this time, so only a short trip.  My life has transformed into an incredible journey, but I have done the hard yards too, believe me it has been tough, very tough.  I describe my life like an onion where I get to peel off the layers as I discover them, I think I am getting close to discovering everything that happened, and boom another big realisation happens that knocks me for a 6 for a while, but I get up, dust myself off and keep going straight ahead.