Mould and Mildew in your Home Office 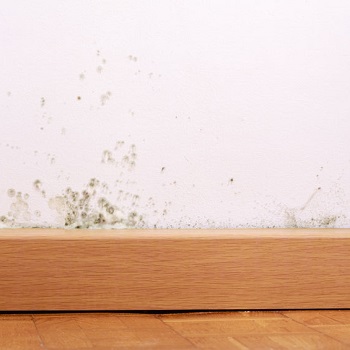 Is mould and mildew making you sick?

It has been a long winter in Melbourne with many people working from home. It is possible that you are exposed to higher levels of mould and mildew than ever before. It may be making you sick!

Mould and mildew grow by producing and spreading microscopic spores. Inhaling these tiny airborne spores can lead to health problems in humans, mostly in people with existing respiratory conditions such as asthma. As such, it is important to clean and remove mould and mildew when you find them, and keep on top of the cleaning while aiming to fix or control the problems or conditions that encourage them.

Both mould and mildew are a type of fungus and very much part of the natural world we live in. Along with insects, they play a significant role in contributing to the decomposition of plant material that enriches soil. Decomposition, or biodegradation, is just a nice word for rot and decay. Now you can begin to understand why having mould or mildew inside your house is not a great thing.

Like any fungus, places that are damp and poorly ventilated suit mould and mildew. In minute amounts, the mould and mildew spores are generally nontoxic and harmless, but prolonged or excessive exposure makes it more possible that your health could be affected. 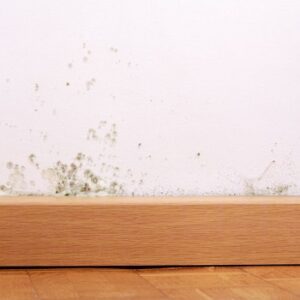 If there is fungal discolouration and growth in your bathroom, it’s most probably mould you see, not mildew. Green or black in colour, you might see it on the grout between tiles or under the sealant used for shower screens, sinks or baths. It often appears slimy. Mildew is classified as a type of mould. It grows on flat surfaces and is white, yellow or grey. It’s often described as fluffy or powdery. Mildew thrives in humid conditions.

Quite often, especially in older homes, black mould might form on the bathroom or toilet ceiling. This is most often due to poor ventilation or a lack of an exhaust fan to dissipate steam and prevent condensation. Moisture will attract and feed mould spores. Elsewhere in the house, this sort of mould can often be seen on lower walls and is referred to as rising damp, where moisture under the house leeches up through the walls. Mould and rising damp can both lead to a musty fetid odour. This is literally ‘the rot setting in’. The mould, if left unchecked, will grow and attack the integrity of plaster, floors, ceiling and mortar, even carpet and furniture. It’s a health and wealth hazard if not properly addressed.

Why do you get mould?

The main need for mould to grow and spread is moisture. There are several risk factors for households to be aware of. The number of people in a residence, the amount of time spent in a residence, the size of the residence, proper heating, good airflow and effective insulation all affect dampness in the air and on surfaces – and not just in the bathroom or toilet. Consistent cleaning and maintenance is the best way of preventing mould taking hold and growing, including the use of mould-killing products and sealant inspection or replacement.

It is important to reiterate that very few people with contact or exposure to mould will develop serious health problems. It is a greater risk for those with compromised immunity or existing respiratory diseases though (such as people with HIV,  those undertaking chemotherapy or organ transplant recipients). Symptoms that could indicate a mould or mildew problem might include a blocked nose, sneezing, coughing or wheezing. Asthma and allergic conditions might also occur more frequently.

If you intend to clean large areas of mould, such as on a ceiling, be aware that cleaning will also disturb and distribute spores. The aim is to kill all the active spores to reduce any recurrence. Some simple personal preventative steps should be taken to minimise health consequences and the spread of the mould. Wear gloves, goggles and a mask. Close the room to prevent spread to other areas of the house, but open a window to improve ventilation. The cleaning should be a two or three-phase exercise. A simple detergent and water wash of the area first. After this has dried, the second phase is an anti-mould or bleach solution clean to disinfect the area. Again, let the area dry then repeat with an anti-mould or bleach solution. Discard or disinfect cleaning cloths or equipment.

Please don’t ignore mould, mildew or rising damp in your home. Take measures to clean and kill the mould you see. If any symptoms develop or persist, please inform your doctor.